My mother had several life-explaining sayings including: Nothing is ever as good as it seems or as bad as it seems. Perhaps she was referring to New Year’s Eve? For most of us, New Year’s Eve is loaded with both celebratory anticipation and the ghost of disappointing New Years past. As a result, some of us become New Year’s Deniers — oh, it’s just another day. Others reject the possibility the night could possibly be anything less than the most festive of the year — the veritable night they invented champagne.

Like most things in life, New Year’s Eve is a matter of what we make of it.

First and foremost, find some personal time to reflect, notice and take account. Really. Whatever else it is, New Year’s eve is a moment of transition from what was to what will be. At the stroke of midnight 2010 is gone and 2011 is here.

What was
What was includes people we leave behind. For me, this year meant leaving behind my mother…and Izzy, my black lab of thirteen years…and Stuart, Christina’s and my dear friend. 2010 will forever be a year of loss. The passing of another year also means a step closer to the end than the beginning. Nothing imminent. But closer. It seems altogether right and proper that I spend some time being sad.

What will be?
Each new year begins with challenges and opportunities. Make some commitments. You might think of a commitment as a New Year’s resolution with a plan. Every year for as long as I can remember I have had the challenge and opportunity to get healthier…lose weight and get more fit. For me, the commitment to weight loss and fitness actually began this year. I have been spending considerable time over the past several months “positioning myself” to finally succeed with this. I have come to recognize that I cannot be successful without setting the pre-conditions including better understanding the emotional underpinnings and setting up a support system. Events during the year seem to have a opened a door to success here that somehow previously seemed closed. I feel very excited about finally doing this. I have other challenges and opportunities but this is the most important.

Spend New Year’s Eve at home.
Not necessarily at your home. Years ago a great Philadelphia food writer named Jim Quinn wrote a restaurant book called Never Eat Out on Saturday Night. His notion was that a hectic Saturday night is the worst time to visit a restaurant. Well, New Year’s Eve at most restaurants is Saturday night squared. There are great advantages to entertaining at home rather than dining out ranging from cost to the warmth of a home and the ability to actually talk and hear others talk. You could say that the disadvantage is the work involved. If you are a regular reader, you know my entertaining prescription for planning, spreading tasks over time and resources, doing less…making sure it’s fun for you. But I am fine with bowls of nuts and olives, a great salad that you make, take-out pizza, a bakery-bought dessert and box of excellent chocolates and champagne if that’s what it takes. Or maybe it’s not too late to organize an impromptu pot luck…let it be an International Take-out Pot Luck if you are really last minute. A little Chinese/Vietnamese, some Italian, maybe some Greek. Just assign meal categories and provide the home, plates and glasses. Enjoy.

A Meaningful Toast to the New Year
My dear mother — a home entertainer nearly to the end — would gather “Henny’s girls” around the table and provide some personal focus to the dinner conversation. It was always something that encouraged sharing and promoted connection and intimacy. Your New Year’s toast…started some time before the clock strikes twelve is the perfect opportunity to make the transition from what was is to what will be a moment of real meaning. I think my mother would suggest something like this: Each person, one at a time, address something they will miss about 2010 and something they look forward to in 2011? Don’t be shy about initiating this. My mother never was. You’ll be glad that you did.

Christina and I — along with Noah and his new puppy — set out on our annual Christmas pilgrimage to Larry and Susan’s home in Tuxedo Park with our trunk loaded (over-loaded?) with gifts and the makings of  Deconstructed Seafood Gumbo, my small contribution to our Christmas Eve dinner…with a minimum of seven fishes.

Larry always provides a printed menu of the evening’s offerings — a table of contents and souvenir. Dinner begins in the kitchen as guests gather with mostly room temperature hors’doeuvres. Beverage choices included champagne or the Tangerine Kumquat Martini that I brought — a durable refrigerator left-over from Thanksgiving.

Spanish white anchovies – boquerones — have become a Christmas staple. Here they are on crostini with roasted pepper and garlic aioli.

This year’s gravlax — another staple — included a long bath in herb-filled olive oil after the traditional salt, sugar and dill cure. The accompaniments include honey mustard and sprigs of dill.

Regina’s, a guest at most of our Christmas eve dinners, provided little salmon tarts with caviar — an homage to her Russian heritage.

Deep-fried panko-crusted calamari with lemongrass chili sauce was our only hot hors d’oeuvres that made for a relatively stress free service for host and hostess.

Once everyone has gathered and sufficiently feasted on hors d’oeuvres in the kitchen, guests shift to the dining room and and adjacent living room, beckoned by the balance of dinner that Larry lays out as a buffet.

Confit of octopus with saffron potatoes on arugula. The octopus was slowly cooked in olive oil. 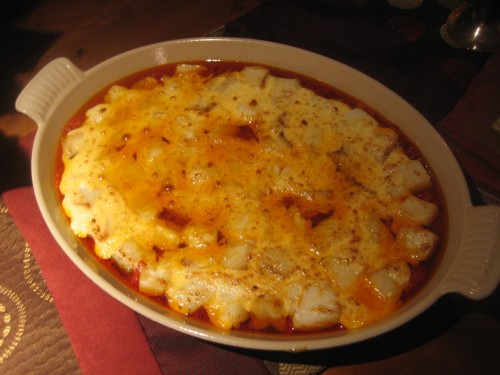 Baccala — salt cod — is traditional Christmas fare. Here Larry served it with a wonderfully rich garlic tomato sauce topped with creme fraiche, heated and finished under the broiler. Delicious. It was Larry’s only other hot dish.

The final item was my Deconstructed Seafood Gumbo. Deconstructed means taking the elements of a dish, pulling them apart and re-organizing them. Here is the mis en place for the gumbo. The gumbo itself is in the pot on the stove. Ready to go is the crab meat and chopped shrimp in the containers in the foreground and the pickled okra and remoulade  in the background. Waiting in the refrigerator were the breaded oysters ready for the deep-fryer.

Here are the andouille risotto cakes ready to the re-heated in the oven. 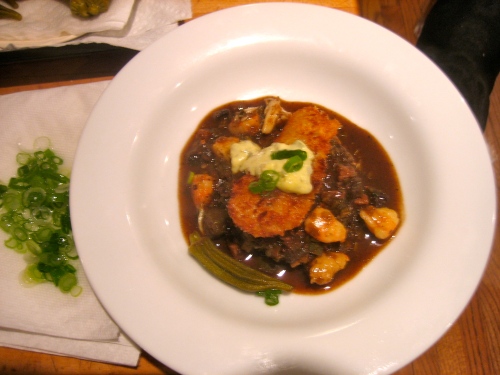 Noah helped me turn out the finished product served in bowls — the andouille risotto cake on the bottom, covered with a ladle of the brown roux-thickened gumbo replete with shrimp, crab, okra, green pepper and onion, topped with a fried oyster and a dollop of remoulade with a pickled okra on the side. My verdict: I think the concept was sound. But in the name of making a very authentic Cajun-style gumbo I think I took the brown roux too far — it went over to the dark side — so that the gumbo itself tasted too much of the roux and not enough of the seafood and vegetables. If I were doing this for a restaurant I would re-work it, but this was just Christmas dinner and it was Good Enough. Good, but not great.

In past years Larry has served a substantial Christmas day mid-afternoon dinner. This year, after present exchange and opening, we sat down to an earlier and decidedly lighter Christmas brunch. This was a welcome change.

Our first course was a beet and blood orange salad with goat cheese and mint. 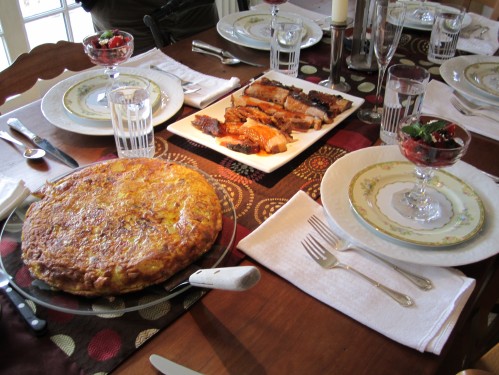 Served family style was a Spanish tortilla — aka fritatta — loaded with chanterelles and potatoes and scented with white truffle oil.

The piece de resistance was the slowly braised fat-laden pork belly — a stand-in for bacon — scented with star anise. Pork belly is one of life’s great guilty pleasures.

Dessert included a bread pudding made with torn croissants and a bourbon caramel custard along with a raspberry tart left for us by Regina.

It was altogether satisfying meal and the perfect follow-up to Christmas eve with nary a fish in site.

It is clear that Larry — with able assistance from his wife Susan — puts great effort into our annual holiday gathering. But he is the model of the ideal home entertainer. Larry plans carefully and spreads his tasks over time. His food is not simple, but he “invests” his efforts in things that can be done ahead with reliance on room temperature food — plattered and ready to go and/or food that can be popped in the oven and served. The only item that actually required careful last minute cooking was the calamari and even that was fully prepared requiring only a little dredging and frying. There is never a time that I am entertained in Larry’s home that I don’t learn something about how to enjoy being a home entertainer. Most importantly, Larry and Susan’s efforts bring together the family to share the warmth of their home.

Cliff Lee and Metropolitan Bakery
I have here lauded my brother-in-law Larry for his fine culinary sense. Larry can tell you the best place to get tempura in Tokyo. He guided us to the best tapas in Madrid. Larry is a New Yorker. He lives in Tuxedo Park — near West Point and works in Manhattan. He will travel far in search of an ingredient. But each Christmas Larry requests that we bring bread from our neighborhood Metropolitan Bakery because, he says, ” It’s just better than any bread I can buy in New York.” So, Philadelphia has at least two things that New York does not…Cliff Lee and Metropolitan Bakery.

Thank you for visiting.

Filed under Entertaining at Home, Family and Friends, My Life

5 responses to “…and Happy New Year”